Showing posts from June, 2021
Show all

- 6/29/2021 01:20:00 PM
Hurt a communist's feelings and go to jail for up to 20 years???? Read the original, here . Michigan Court Rules Hurting a Liberal’s Feelings Online Can Result in Terror Charges, Lawmakers and Activists Respond June 29, 2021 The Michigan Court of Appeals has ruled that hurting a liberal’s feelings can be considered a terrorist threat and punishable by up to 20 years in prison, which has prompted a response from activists and lawmakers concerned about the grave implications this ruling may have on the 1st Amendment. “Importantly, the issue is not whether defendant actually made a threat of terrorism, which would be a question for the trier of fact. Rather, the issue is whether, on these facts, defendant can be charged at all. The issue before us turns on whether a social media post made by defendant can constitute a ‘true threat,’” the court of appeals wrote in their ruling that puts all conservatives in the state at risk.  This appeals court ruling is pertaining to the case of 20-y
2 comments
Read more

Unrestricted Warfare from the 'Resident' on the Middle Class Suburb...

Check out Tucker Carlson if you haven't already.  This is from last night.
Post a Comment
Read more 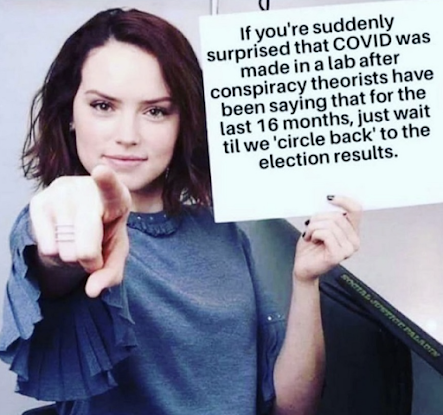 Not only is the snark hilarious, but it really strikes home!!  If you're not checking his site regularly, you might be missing out on some great humor! See the originals, here . Annnnnnndddd, the ABSOLUTE BEST WAS SAVED FOR LAST!!!
Post a Comment
Read more

Something to Consider on Your, "OH CRAP!" gear... 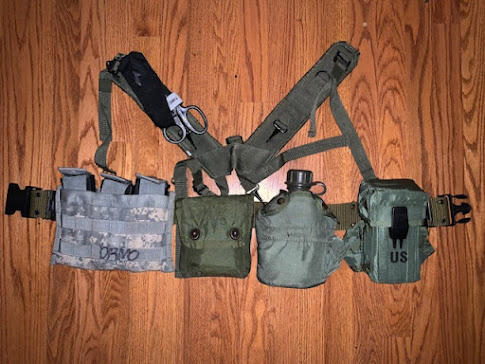 A couple things you should consider: Don't fall victim to 'over packing.'  You MUST be able to carry your load!  Otherwise, Shelter In Place. Priorities: Ammo Water Food Another few magazines of ammo. All Else - and 'all else' doesn't mean everything else but the kitchen sink.  Try a poncho liner instead of a sleeping bag.  Try a couple of old-school stainless steel canteens instead of a hydration bladder (even though I really like them).  Try a canteen cup instead of a cook pot (remember, this won't be a camp out). Ability to Blend In.   DO NOT try to go 'down town' in all your multicam clothing.  You might want to have an old top coat (really faded), a zippered, oversized hoodie...old jeans...scuffed up boots, etc.  Remember, dirty clothes will camouflage you in the sticks.  You will be seen moving before you're seen because of your city clothing. Practice Moving SLOWLY .  Not necessarily at night, either. PRACTICE your land nav.  Above all
2 comments
Read more 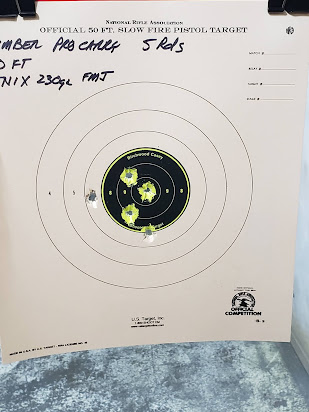 Used two pistols:  Glock 41 & Kimber Pro-Carry II.  Both brands fired from both pieces at the same distances, same round counts, and same temperature (cold barrel, cooled barrel, and hot barrel). These are my results in pics - note, any abnormalities in group size/location can be lain solely at the feet of the operator. Me.: Kimber Pro Carry II - 25 yards - Fenix and Winchester 230gr FMJ Glock 41 - 25 yards - both Fenix and Winchester 230gr FMJ Bottom line:  I'm happy with all three of my practice ammunition brands (Winchester White Box, Freedom Munitions, and Fenix); not a real discernable difference in their performance when one takes the shooter and distances into account. The only real nit I have to pick with Fenix is that on their web site from which I ordered, the 250 round order implies 5 boxes of 50 because of the picture shown.  When I picked it up, it was in a heavy plastic bulk bag.  A bit more tedious, but that didn't affect performance. Get the best you can g
Post a Comment
Read more 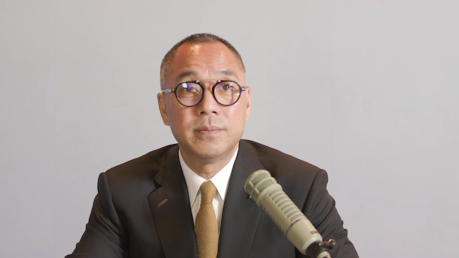 Original, here .  Emphasis mine.  He's spot on, as usual. Critical Race Theory Author William S. Lind Posted on June 22, 2021 Across the country, grass roots resistance to “critical race theory” is growing, and that is a good thing.  But what is critical race theory and where did it come from? At its core, critical race theory is the argument that all white people have an unjustified negative attitude towards blacks and some (not all) other races, which leads whites to treat blacks et. al. unfairly.  No white is exempt from this bias, and if they are to avoid being “racists”, they must be psychologically conditioned to mouth a set of lies about what evil people they are, grovel in the dirt before blacks, pay “reparations”, etc.  For blacks, it’s a racket, what Tom Wolfe called “mau-mauing the flack catchers.”  For black “leaders”, it’s a highly remunerative shakedown: pay me off or I’ll call you a racist.  It should be ridden out of every town and campus in America on a rail, weari
Post a Comment
Read more

We ALL Better be Paying Attention!!

H/T WRSA . Note his tag line:   " We have no guns – we have only stone, boxes of matches and petrol. Together, hand-in-hand, with our boxes of matches and our necklaces we shall liberate this country.” – Winnie Mandela When Everybody Else Is Playing The Tribe Game, You Really Don’t Want To Be An “Independent Individual” https://www.unz.com/isteve/charles-murray-vs-ibram-x-kendi-murray-has-facts-and-logic-on-his-side-but-kendi-has-the-us-navy/#comment-4726297 Like or not, it has already been decided that FUSA will be torn into shreds by the Communists and their allies on behalf of Muh Diversity. You really don’t want to be the last kid waiting to be picked. Please read (hopefully, re-read) this recent post here on the Muthaship: Remember all of this joyous claptrap back in the late 20th century? https://youtu.be/R-ZplG81oZg You are in queue right now, just like the S’Africans and the Rhodesians were. Plan better than they did. Or suffer the fate of prey. https://allthatsinterestin
Post a Comment
Read more

A Very Long, but Educational and Worthwhile Read...

- 6/17/2021 12:05:00 PM
H/T ' Revolver .'  D/L and or read it at the link.  96 pages. THE ANATOMY OF A FEDERAL TERRORISM PROSECUTION: A BLUEPRINT FOR REPRESSION AND ENTRAPMENT  Collin Poirot*  Collin Poirot  is a practicing attorney in Brooklyn, New York, and holds a B.A. and B.S. from the University of Texas and a J.D. from Harvard Law School.
5 comments
Read more 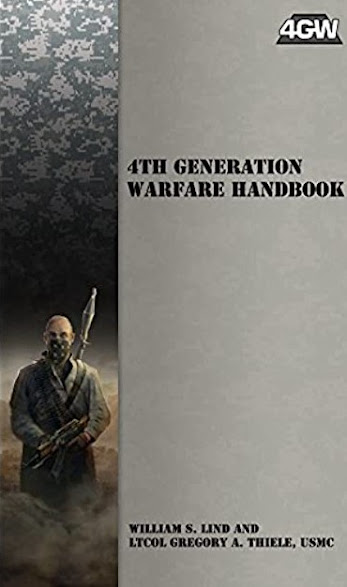 William S. Lind's, ' Fourth Generation Warfare Handbook .'  Below the graphic is an excerpt - Chapter 7 - it's about training, 'light' infantry.  Kinda like 'light' summer reading.  :-).  It oughta whet your appetite.  When reading for local application, replace 'line infantry unit' with your small circle of friends.  The concepts remain the same whether you're a three person or 50 person team.  Do buy the book; it's worth it.  Hard copy provides tech proof censoring of your reading material...just sayin' 7. Training Light Infantry Units This chapter assumes you are the commander of a line infantry unit— platoon, company, or battalion— that you want to convert to light infantry. How would you do it? The same way Captain Trapp did. Flexibility The first step must be to give your troops a light infantry mindset. The way in which light infantry think is much different from the line infantry mindset. Retraining your men without changing
Post a Comment
Read more

Updated Ammo Considerations: Base, LBE, and SHTF Load Out 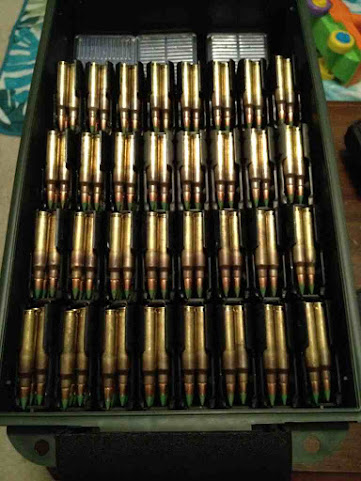 Repost from the 'nuked' blog, originally posted in '18, updated to today's environment.  Just received a question on whether or not I still believed the minimum amount of ammo held in reserve (meaning, never used for anything but SHTF, and when choosing to rotate, new stock is put in before old stock is removed) for each rifle and pistol owned should be 1000 and 500, respectively.   Short answer:   ABSOLUTELY! DTG has always recommended the absolute minimum is to have 1,000 rounds per rifle and 500 rounds per pistol owned in reserve , which does not count that which you use to keep your skills honed, which should be about 750 to 1,000 rounds per year with your rifle, and 500 to 750 rounds per year on your pistol. You might also throw into the equation replacement magazines.   We’ve always recommended an absolute minimum of seven magazines (7.62NATO will most likely be 20’s/5.56NATO, 30’s) for your SHTF preparation per rifle; three magazines per pistol.   D
2 comments
Read more
More posts