Learn From History - Or Repeat It

How many times have your heard "The world has changed."

No it hasn't.  Not really.  Nor have people.

Just like physics hasn't changed; Star Wars and Star Trek are fiction, a virus is a tiny fraction of the size of the holes in a cloth mask and goes right through it in both directions, there is no such thing as a 100mpg carburetor for an old Chevy V8 that the oil companies suppressed and if you try to live on Mars I hope you intend to stay underground 99% of the time because the cosmic radiation will cook you dead within a year or so otherwise.

The Federal Reserve Act of 1913 mandates "stable prices."  Stable has not changed in definition; it does not say "2% inflation counts" or any such claptrap.  Not one Congress has enforced that mandate since 1913 and in fact Congress loves to print credit when it finds it inconvenient to tax.  The inevitable result is first inflation and then productivity collapses, producing stagflation.  If you don't stop it then you get a collapse of your society and people hunt politicians and their families, which usually ends with a dictator or worse.  It has happened dozens of times through history and in fact has happened every time.  How are lumber prices doing, may I ask?  Saunter your way on down to Home Depot or Lowes and have a look.

There are people in this world who are willing to exploit and oppress others, whether it be through slavery, rape, arson, looting, old-fashioned robbery, various schemes of fraud and threats including coercion to forced medical treatments one does not want, such as stabs in the arm for a disease that is not dangerous to the person being stabbed in their sole opinion.  We came up with this idea called The Rule of Law and The Constitution to declare that all persons were subject to the same rules after seeing the ruinous and repeated outcomes in other nations where that was not respected, and indeed that ruin comes today as well.  Now we seem to think we're immune to the consequences of creating "special people" who can violate The Constitution and other people's bodily autonomy with impunity here in the United States.  History says we're not immune whatsoever to the consequences of that stupidity and if we don't cut that crap out there may be plenty of people who are discovered to be crunchy and taste acceptably well with BBQ sauce including a huge percentage of those who think they, their families and children, are the "chosen ones" and immune from the consequences of their actions.

This sort of insanity is not limited to the United States.  We have, for decades, allowed strong-arm foreign nations to become integral to our economic and even military capacity, somehow believing that without exerting the Rule of Law on a consistent basis in every case where we are so-entangled it will all be ok.  This has never been the case before.  In every case where an economic system was intertwined with another nation where The Rule of Law was not demanded to be enforced across said boundaries the nation where that was allowed to happen screwed the other, and in many of those circumstances you wound up with a war.  These days war has a habit of getting a bit warmer than you'd like, you know, like the surface of the sun hot?  Yet we've done this with both China and India, among others; both nuclear nations and both more than willing to screw us and our people.  We did it with Mexico too and destroyed a huge part of our industrial economy, trading industry for Mexican drug cartels supplied out of China with their raw materials!

People are tribal.  They always have been and always will be.  Those who wanted to join our tribe historically were basically forced to do so by exclusion of their old tribe.  It was a one-way door, and once you walked through you were life-committed.  You got no help and had to make it on your own.  As a result we got and bred strong people who built many great things and innovated at a rate never before seen in human history.  Nowadays we don't even imagine any of that's true and the only "innovation" is counting how many different ways you can get shot in Chicago over a weekend.  We have somewhere on the order of 30 million people in this nation today who have zero allegiance to the United States but plenty to their own tribe which they never foreswore.  "Reconquista" anyone?  Roughly six percent of all persons in California alone are here illegally and have no right to be in the United States at all.  There are over a half-dozen recognized Mexican Drug Gangs operating in the United States.  If this is not an invasion would you mind telling me what would constitute one?

What to know what happens if you try to be "multi-cultural" instead of insisting that our tribe is the one you join when you come here, and if not, don't come?  Rwanda or what was Yugoslavia.  Yeah, that good.  Got shovel and machete?

Adults live in reality where facts are collected, hypotheses are formed, tests are made against said hypothesis and then the results are published.  Then, reasoned adults make their own decisions for themselves and their families, weighing personal risk and benefit based on those published results.

Children and psychotics live in a fantasy world where they believe you snap your fingers and get what you want.  When you allow either of the latter two to ascend to positions of power and influence within government your entire nation is standing on a ledge believing you can fly.  There are myriad examples of this, such as believing you can replace combustion fuels with batteries and solar cells or wind turbines; this is crazy-land nonsense as nobody has figured out how to violate the laws of physics, and you just saw a small version of it with the Colonial pipeline.  There's a virus going around, I hear, that has a near-zero death rate in children but in fantasy-land we must stab them with a dangerous drug lest they get infected with something that they may have already had and won't hurt them anyway.  We refuse to adult and admit that roughly a third of the people who died were within six months to a year of their "use by" date, living in rest homes where half of those admitted die within six months and at least three quarters of the rest who succumbed had destroyed their bodies on purpose, making themselves vulnerable to what, in almost everyone else, is a case of the flu.  Rather than deal with these facts, which were known almost immediately in 2020, we instead engaged in a mass-delusional episode akin to putting magic mushrooms in the nation's water supply and led the public to believe they'd all die unless they walked around with diapers on their face scared of non-existent snakes coming out of the roadway that were going to spit venom in their mouth.  Worse, when people got said flu we told them there were no treatments which was a knowing lie and let a bunch of ghouls chortle at the $30,000 they were going to get for a toe-tag in a few days while your grandmother choked to death on her own spit.  We're still doing the same damn thing not just here but in fact worldwide so we can scare people into being stabbed on a subscription basis for immense profit with an unknown risk of pulling the black ball and killing a huge percentage of the public.  LSD is a hell of a drug and I don't give a crap what you do with or to yourself but the effects of same, no matter how the crazy got in one's head, have no place near or on the levers of power.  That sort of cult game is how you wind up turning a nation into Jonestown.  For half a million Americans or so over the last year Jonestown has already arrived and now we're playing the same game without about half the population while attempting to enlist children in drinking the KoolAid.  It's grape-flavored; go ahead and take a big slug.

I promise it won't hurt. 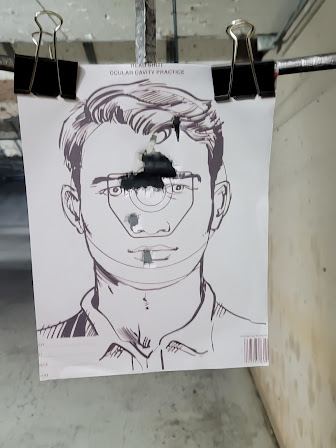