Irrresistible Revolution:  Marxism's Goal of Conquest and the Unmaking of the American Military, by Matthew Lohmeier. 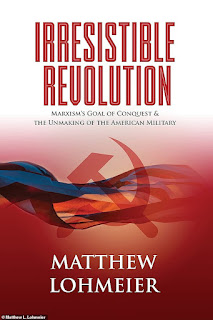 Mr. Lohmeier does a phenomenal job of tracing Marxism from the influencers of Karl Marx to present day demonstrating in detail that what the US Military is experiencing is part and parcel of a plan to utterly destroy all service branches and then, following that, the US itself, by indoctrinating rank and file service members that we're all 'systemically racist' and other divisive fallacies such as 'extremism in the ranks' bolstered the the tired canard of 'white supremacy' and privilege in the military.

I became aware of his book watching Tucker Carlson about a month or so ago, and noted he was an active duty US Air Force Lieutenant Colonel who'd been relieved of duty for writing and publishing the book.  He's currently in a 'window seat,' doing nothing important at all, and is fighting for his career along with his country and honors his Oath to, 'Defend and Support the Constitution against ALL enemies...'

I've not yet completed it, but it is a great, accurate, footnoted read about the development of Marxism built on the foundation of Marx's devotion to Satan, in Marx's own words.

If you're looking for a good book, I highly recommend this one.

Transparency:  I do not know the man, nor do I get anything for this post.  I am, however, proud that he shares my service branch with me:  The United States Air Force.

DTG’s 2021 Updated 10 Week (If You’re Lucky) Plan                      to Prepare for the Worst-Case Scenario     It’s been about 13 or 14 years since I wrote this under my since retired ‘nom de guerre’, and commenting on a blog post recently, CA at Western Rifle Shooter’s Association asked me if I’d mind updating it.   This is a good base plan for folks you might know just waking up to the fact that things are spinning faster in the vortex than ever before, and this might be the best chance for them to get themselves in gear.   Feel free to add or take away as your situation and local area conditions may require.   Understand something, though:   You have a VERY small window; it may even be too late should something happen that accerlerates the current environment like a JATO (Jet Assisted Take Off) rocket on a C130.   So, if you’re just getting started, you need to act now, as in today.   Not next week.   Not in two weeks.   You may not HAVE two weeks. You may be thinking,
Read more
- 12/16/2021 12:38:00 PM